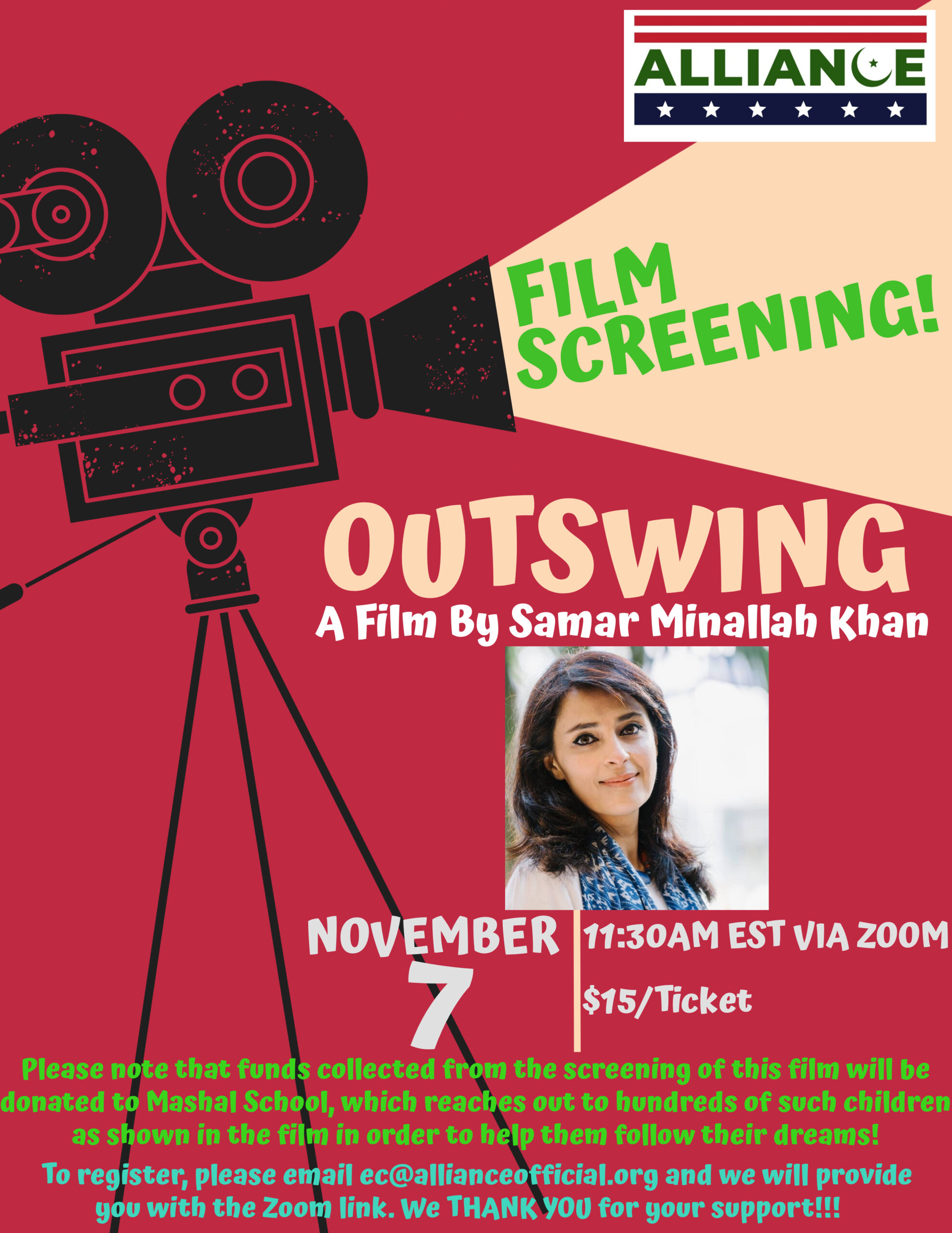 We will have the great honor and pleasure to host Ms. Samar Minallah Khan with us who is the Director of the film.

Join us November 7 at 11:30AM EST. The cost will be a nominal $15 per person which will greatly benefit the girls of Mashal School.

To register, please email us at ec@allianceofficial.org and we will send you a Zoom link.

We look forward to seeing you at the very special event!

Ms. Samar Minallah Khan, is a filmmaker and an anthropologist from Pakistan. She was born in Peshawar, KP, Pakistan.

Through film, Samar reaches out to various audiences in an effort to amplify the voices of women and girls.

Her first film, “Swara-a bridge over troubled waters,” was screened internationally at several film festivals. It led to the first public interest litigation in the Supreme Court of Pakistan and in making the culturally sanctioned form of forced marriage illegal.

Newspapers have called her ‘Savior of the Souls’, ‘Woman who rocks the world.

On the outskirts of Islamabad, a committed coach teaches a team of unlikely players, their families, and a community how playing Cricket can change lives. The girls overcome their fears and anxiety and find strength in something as simple as Cricket. It is a story of how standing up for girls and their passions is the most honorable thing a man can do. In Cricket, an outswing delivery is the one that ‘moves away’ from the line of its bowling. It has the risk of being declared a wide-ball but it can also change the game. Just like an outswing delivery, the girls are ready to ‘move away’ from the prescribed norms and expectations.

I, Samar Minallah Khan, feel honored to be collaborating with the Alliance led by the amazing Nazia Imtiaz, the President, to screen the short film for the Alliance Organization. A big thank you to Nazia Imtiaz Hussain for your help.

The proceeds of the film will directly benefit Mashal School, a philanthropic initiative that reaches out to children from the most underprivileged strata of the society.

The film focuses the lives of some students of MashalSchool. Girls for whom attending a school and getting a chance to play Cricket is a respite from the everyday challenges of life. Cricket for these girls is more than a sport.

By supporting Mashal School’s philanthropy such life changing initiatives and girls’ education can be made sustainable.

We use cookies on our website to give you the most relevant experience by remembering your preferences and repeat visits. By clicking “Accept All”, you consent to the use of ALL the cookies. However, you may visit "Cookie Settings" to provide a controlled consent.
Cookie SettingsAccept All
Manage consent

This website uses cookies to improve your experience while you navigate through the website. Out of these, the cookies that are categorized as necessary are stored on your browser as they are essential for the working of basic functionalities of the website. We also use third-party cookies that help us analyze and understand how you use this website. These cookies will be stored in your browser only with your consent. You also have the option to opt-out of these cookies. But opting out of some of these cookies may affect your browsing experience.
Necessary Always Enabled
Necessary cookies are absolutely essential for the website to function properly. This category only includes cookies that ensures basic functionalities and security features of the website. These cookies do not store any personal information.
Non-necessary
Any cookies that may not be particularly necessary for the website to function and is used specifically to collect user personal data via analytics, ads, other embedded contents are termed as non-necessary cookies. It is mandatory to procure user consent prior to running these cookies on your website.
SAVE & ACCEPT